CELESTE DE LUNA is a Chicana/Latina/Tejana artist residing in Brownsville and San Antonio, Texas. De Luna is a lecturer in the School of Art at the University of Texas, Rio Grande Valley and is a community artist, mother, and educator. De Luna is a cofounder of the socially engaged art collective Las Imaginistas, owner of Metzli Press, and a June 2020 Vermont Studio artist in residence. Her print “Necrocitizen” was recently featured on the cover of book Fencing in Democracy by Miguel Diaz-Barriga and Margaret Dorsey and published by Duke Press (2020). Her work seeks to articulate and dismantle oppressive structures in the material, spiritual, and supernatural world. Rooted in a Chicana feminist perspective, she seeks to tease out the intricacies of living in and along the borderlands in her art. Frequent motifs in her work include imagery depicting migration, such as barbed wire, fences, bridges and anchors, emphasizing the experiences of women, children, and families. You can find her at www.celestedeluna.com or at @celestedelunaart on Instagram.

No me pides perdón

The woman in this piece is a modern day La Llorona who is crying for her lost children. The children—who are shown as roses in this image—have been lost to her as a result of our current administration’s paternalistic and violent immigration policy which separates immigrant families. La Llorona’s face remains passive as she mourns her children while death lurks behind her. Above her are asylum seekers crossing a bridge on the edge of death’s sharp, unforgiving blade. I find it fitting to portray asylum seekers as potentially facing death on their quests for a better life. 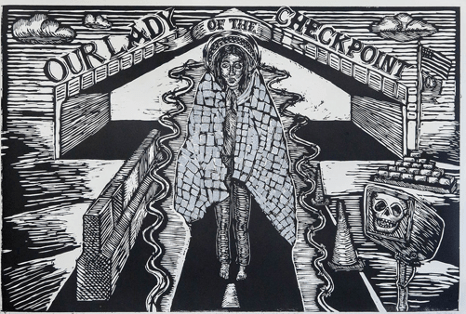 Our Lady of the Checkpoint

Title: Our Lady of the Checkpoint
Year: 2019
Dimensions: 36 x 48”
Media: Woodcut and Vinyl on Archival Paper

There is an unspoken anxiety that many people feel when approaching the checkpoint. There are multiple factors at work in these anxieties, but inherited ideas about citizenship, worthiness, and not appearing “suspicious” play a big part. Who do I pray to alleviate the anxiety? The commercial Guadalupana? The Virgin de Los Lagos? I realized I needed a special virgin—a virgin of the checkpoint. In my imagination, I see her shimmering in the heat, blinding me with her reflective blanket, emanating barbed wire rays and a razor wire halo around her head. She is standing in front of the checkpoint shelter, which becomes her capilla, and the cameras are the all-seeing eyes not of God, but of the government. She came straight from one of the detention camps, I think. This is the appropriate virgin for this place. 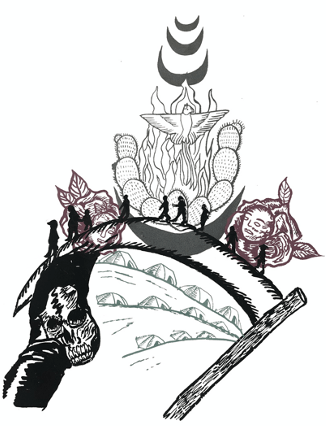 Asylum seekers are crossing a bridge made of Santisma Muerte’s blade. Santa Muerte is a folk saint with Aztec roots that is the patron saint of laborers who work at night as they face a particular set of dangers. I was also inspired by Anzaldúa who described the borderlands as “this thin edge of barbed wire.” I drew on that to illustrate the Matamoros-Brownsville asylum seekers who wait on the international bridge perched between life and death. Their make-shift shelters, and tents rest precariously underneath Santa Muerte’s blade—reminiscent of the sharpened edge Anzaldúa alludes to. 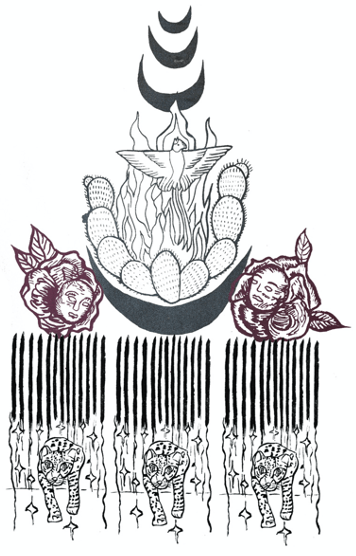 The quetzal is paired with a crystal-eyed ocelot morphing through the border fence. Both the quetzal bird and ocelot are animals prevalent in Aztec imagery. This image is about unfettered freedom from man-made environments and is a commentary about the federal government’s official Prevention through Deterrence border policy: a necro-policy that uses Mother Earth in a twisted fashion to entrap vulnerable migrating peoples in the harshest parts of the land and prevent them from entering the U.S. via death through exposure. The ocelot image evokes the future as in my vision, they have evolved the ability to morph through border walls. 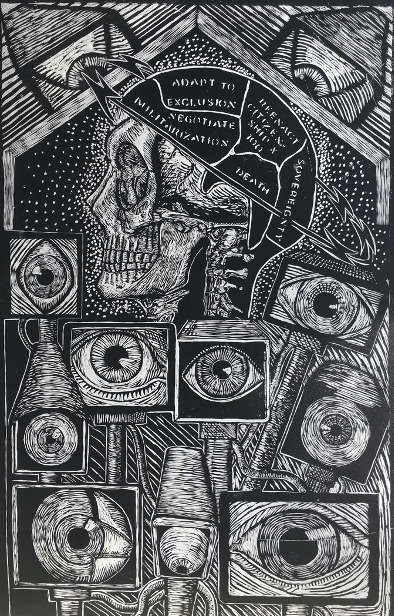 The woodcut Necrocitizen depicts how various systems of oppression impose second class citizenship on Brown bodies. Inspired by the old racist science of phrenology, my piece shows demarcated areas in the brain that are devoted to things like “adapt to exclusion,” “negotiate militarization,” and “death.”

Texas Hold’em is a linocut on paper about the state of Texas refusing to issue birth certificates to American born babies of undocumented women held in detention camps. The child is an “anchor baby” and references the game of poker, implicating the state in playing games with peoples’ lives. 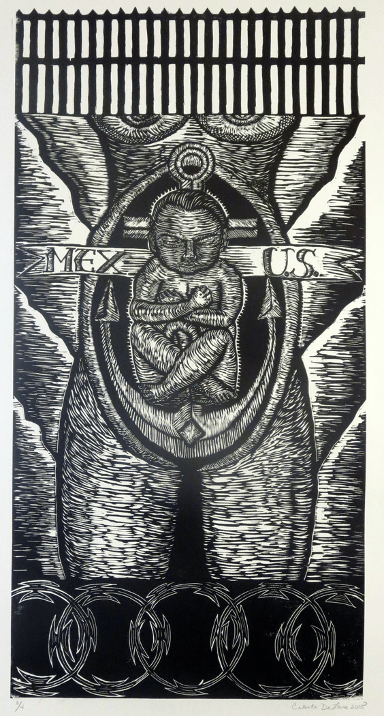 My work deconstructs the hateful ideology of the term “anchor baby” by providing a more human face to the babies that anti-immigrant, right wing broadcasters condemn. It shows a baby nestled with its feet pointed downward, a presentation that makes birth a potentially dangerous situation. Behind the child is an anchor, implying that the child in limbo is an “anchor baby.” The work also shows a scroll and abstract views of land, which symbolize the U.S. and Mexico. An image of a woman’s body as a vessel and political battleground is the context for this birth. It matters which side of the river she will give birth to her baby. 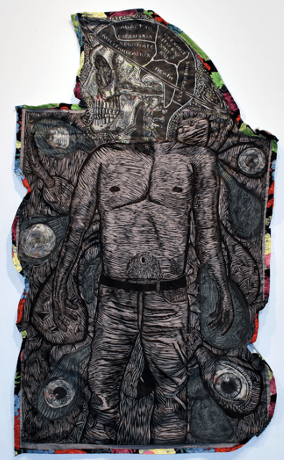 I also work in large-scale relief prints on fabric and create art quilts of my work. Whereas traditional printmaking on paper is colored by European standards, working with fabric holds none of that baggage. I print on fabric wildly and then later rip or cut and make quilts, blankets, banners, flags, or whatever with haphazard sewing. Paranoia Quilt is a caricature of the hysterical reaction that others have to stereotypes about border citizens and the U.S.-Mexico border. I imagine this quilt is what someone who watches National Geographic Channel’s Border Wars might wrap themselves up with on the couch.