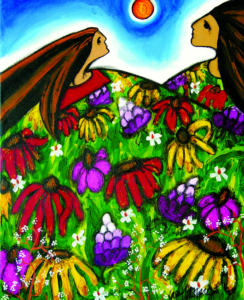 Detail from “Women Wearing the Earth, 2009” by Enedina Casarez Vasquez

The works brought together in this volume stage a conversation about the range of life paths encountered by Chicanas and Latinas: paths that have been set before us, paths we chose for ourselves, worn paths we blindly follow, new paths given to us by others who have forged the way, as well as the many paths we have had to fiercely blaze or reconstruct. The trajectory of the works in this issue address a spectrum of life paths spanning from the representational realm of popular culture to the experiential realms of family, work, and school.

Enedina Casarez Vasquez
Art as Life and Life as Art

Tanya González
Is Ugly the New Sexy? The Complexities of Latina Sexuality on Ugly Betty

Dolores Zapata Murff
Elvira: A Testimonio on Employment and Sisterhood